Sewing more than a seam or button doesn't happen here. My baking endeavors are here and there. And I bristle at the first sign of snow.

But the other day, when we were once again blessed with a lot of snow, we opted for an unusual afternoon activity. Making "sugar snow."

For those of you not well-versed in the Little House books, a wintertime treat was taking the maple syrup, boiling and pouring over fresh snow until it hardens into a candylike consistency.

The Hungry Reader describes how it was done:

Our favorite moment comes when Laura and her cousins scoop up big plates of snow
and Grandma pours a ribbon of steaming syrup onto each one. The syrup hardens
into candy, which is devoured immediately. The children go back for again and
again another helping, for "maple sugar never hurt anybody."

I figured how hard could it be to recreate? I had a recipe in a cookbook I'd been meaning to explore, and decided there was no better time than now to play a little.

If I was a smart woman, I would have followed more conventional instructions. Maybe even used a candy thermometer. But no, in my arrogance, I poured syrup into a measuring cup and stuck it in the microwave.

All good until the first round boiled over, leaving a sticky mess in its wake.

The second round was more contained, but clearly didn't get hot enough. Still, I pulled out a bowl filled with snow from our backyard, poured the hot syrup over it, and ended up with a taffy-like consistency. 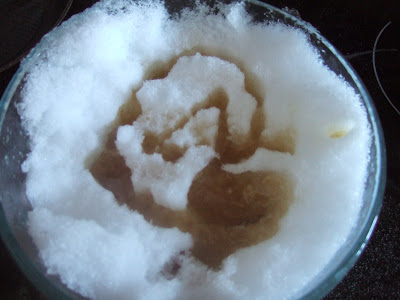 The kids were intrigued, though weren't pleased that the candy was nearly permanently stuck to their teeth.


Still, the experience was an interesting one. "We're baking snow!" my daughter declared to her dad.
Posted by Robbie at 5:40 AM

I have never heard of this, but down in the southern parts of Alabama, we get snow about once every 5 years and it's only about an inch or so. :) That would explain why I've never seen this done before!

Sounds fun and tasty...looove maple-flavored anything! Thanks for posting!