Making Easter baskets out of paper. That's what my daughter had on her mind.

In my naivity, I thought this would be a great activity while her brother was sleeping. And then I went hunting for directions.

Got coupons? I have stacks of ads and good intentions, and this basket from Roots of Simplicity would be a great solution: roll, glue and go. The project takes about an hour, not including drying time. 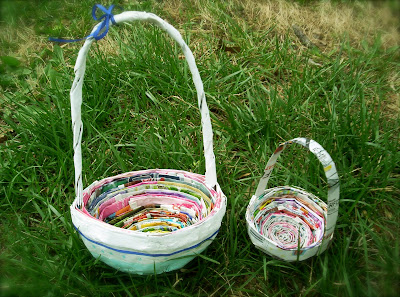 Unfortunately, needed something a little more in tune with the inpatience of a kindergartener. Instead I found another alternative at Miss Birtie's Blog. Simple, but easy enough to do with some leftover cardstock or magazine ads. 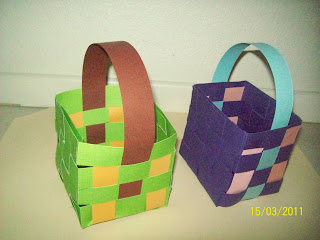 Bunny "baskets" for the garden

Baskets from the Easter Bunny have been something I've struggled with since becoming a parent. I don't want the kids overrun with trinkets, or worse, drowning in sugar, but there's something fun to the tradition of a little treat on Easter morning.

In recent years especially I've worked to simplify the kids' baskets, adding a small religious book or item or a toy that they can enjoy. Last year, The Bunny brought "harvest baskets" - large baskets that the kids have since used to harvest their beans and tomatoes from the garden.

This year, we're taking a different spin on it. Noting my kids' love of (OK, fights over) watering our plants with the hose, we're investing in cute watering cans which will be used as the "baskets" this year from The Bunny. Keeping with the theme, my little guy will get his own pint-size gardening tools, and my daughter will get a flower ring she pined over at the Girl Scout shop.

You could easily add seeds or other fun items to the mix, but in our home, we're well stocked-up.

Are you doing any alternate Easter basket ideas this year?
Posted by Robbie at 7:24 AM 1 comment:

Note to self: While your children might understand the concept of one pea seed per hole in the ground, it does not necessarily translate to other seed packs. Like radishes. Of which an entire pack of heirloom seeds was poured on the ground into the diameter of a coke can! Yikes.

Sprouts anyone?
Posted by Robbie at 7:19 AM No comments:

The WOW Wonders of Water It's Your Planet - Love It!  Journey is on the agenda for our Brownies next fall, and we leaders are anxious to get going.

I'm always surprised by comments I've seen online poo-pooing a potential year focused on water. Think of all it ties into: our food, our health, our environment, our animals, even our faith. The possibilities are endless. 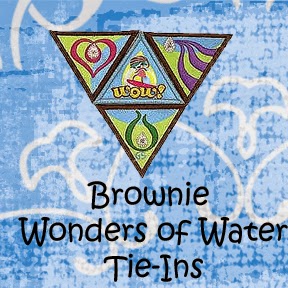 Today, I'd thought I'd share a few resources and ideas to tie into the Wonders of Water Journey, for any Brownie leaders out there hunting ideas:


Water Patch from the EPA: Though I'm not exactly certain the patch is still available, there are wonderful activities to consider.


World Water Monitoring Day resources: Water monitoring is an activity seemingly more geared toward older students than our second-graders, but there were some things more geared for younger ones, such as a mystery book on water we're at least exploring whether to offer the girls for fun. (Bonus: The items are free, though they encourage the donation of water-testing kits.)

Let's Get Digging Try-it, which focuses on caving, erosion, etc...


We're also looking at the Home Scientist badge (great water-related activities!), our council's Fishing Try-it and the Household Elf badge, which focuses on greening our home.Would love to hear from others who have tackled these projects!
Follow Robbie @'s board Girl Scout Projects on Pinterest.
Posted by Robbie at 6:29 AM No comments: 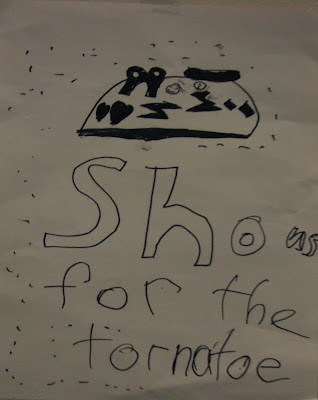 The tornadoes that hit southern Indiana two weeks ago struck too close to home. And I don't mean geographically.
I grew up in Wichita, where tornado sirens blew twice a week in the worst of the season and you didn't really worry until the crazy weather spotters on the radio spotted something on your end of town. I remember clearly the F-5 that hit the suburb of Anderson just before my senior year and how one house, walking distance from my home, was fine, and the next looked stepped on.
I was blessed that when the F-1 hit our one-stoplight town in Kansas in 2001 that it lifted a block from my home. I still remember the train sound, the destruction, the leaves embedded in my plastic lawn chairs and siding. And I remember the little children hysterical in church the next time it stormed.
And of course the former reporter and tornado survivor (a decade ago at work) watched it all unfold on Twitter and the news. And the children were watching.
You forget how much little ones absorb, even when they're playing. So when my daughter wanted to pray for the people in Henryville two days later, I knew we had to do something. Children need to know that they can pray for results, but they also need to know they have the power to make change.
That was when we decided our Daisy Girl Scout troop needed to do something. The funny thing about tornado relief, though, is that organizations aren't equipped immediately to take things. They need food. And water. And shelter. And cleaning supplies. And, ideally, money. All of which would teach the girls nothing, and impose yet another thing for parents to buy.
Several calls and emails later, we found our answer.
Our troop would do a shoe drive, collecting outgrown shoes from our closets for Soles 4 Souls. (As my pastor put it: Kids lose their shoes on a good day!) My hope? Each family could find one pair to donate.
And then it grew. Our church's disaster committee, who I contacted for possible help in donating them, hooked us up with our pastor, who announced it during a sermon on Girl Scout Sunday. (The first-graders were thrilled!) So we made posters and collection boxes. And the word spread.
Each day, I'd tell my daughter: We have 11 more pairs. We have 20 more pairs.
Officially, our drive is over, but a few donations are trickling in. We've easily exceeded 200 pairs of shoes. More than half are going to Osgood, Indiana, with the church disaster committee this weekend. The rest are being shipped to Soles 4 Souls to help other communities in need.
It's an awesome lesson to share with our girls: By yourself you may not be able to do much, but as a team, you can accomplish a lot.

Posted by Robbie at 7:27 AM No comments:

In honor of our basketball team, a smoothie for the Kansas Jayhawks!

This morning while making smoothies, I quickly realized the blackberries I'd grabbed were actually dark raspberries instead. I threw in blueberries in a blender and declared it a "Jayhawk Smoothie."

My 4-year-old quickly corrected me. It's not enough that it was red and blue. We also needed yellow for a beak! A banana quickly pacified him.

Blend. Enjoy!
Posted by Robbie at 7:41 AM No comments:

Cooking breakfast with my 4-year-old has become one of our new family traditions. But when you realize you're out of eggs (no waffles), milk (whoops) and other staples, you have to get creative.

Fortunately I had on hand a review copy of Chole's Kitchen: 125 Easy Delicious Recipes for Making the Food You Love the Vegan Way. I'll do an actual review when I've had the chance to try more recipes, but the discovery of a donut recipe was a blessing in disguise. Or a curse. I'll get to that later.

I'd heard of baked donuts but was somewhat skeptical. And vegan? I'll admit it sounded strange. But it was worth a shot. The kids loved it. Loved making it. Loved eating it even more.

Here is the recipe, as we tweaked it for our ingredients we had on hand. The official recipe said it made a dozen, but ours came out closer to 18 donuts.

Mix dry ingredients in one bowl and wet in another. Whisk together until just combined. Do not overmix.

Using a quart-size plastic bag with the tip cut, pipe batter into the donut pans or in a circle on the cookie sheets. (Note: If using a cookie sheet, purists be prepared that the donuts may lose their "hole" while baking.)

Lesson 1: DO NOT OVERFILL THE BAG. Just trust me on this one.

Bake 10-12 minutes, then cool before removing from pan. Glaze with mix of one cup powdered sugar and 2 tablespoons almond milk.

Lesson 2: Watch your children carefully. And I don't mean in the baking process. I mistakenly thought my boy had two donuts, only later to find he'd snuck off with another four! Let's just say we paid dearly for our donut experiment, as he bounced off the walls during his sugar buzz. Then of course, on the way to church, he said he and his bear needed a donut after church - but they would share.
Posted by Robbie at 6:53 AM 1 comment: