Vermicomposting has been on my list of things to try, but I will be honest in that I've been a bit reluctant to step foot into the world of composting with worms.

After an evening composting class where I saw a worm bin - created out of a file box - I figured it was worth a try. My oldest child is obsessed with worms, and after all, didn't they want a pet?

The owner parted with a cupful of worms, and armed with directions, we created our worm bin in about five minutes.

I reused a styrofoam cooler that was used to ship insulin to me. It's been collecting dust in my garage for a year, as I've never really known what to do with it.

I poked holes for air in the lid.

Inside, we added the recommended mix of worm food: Shredded papers (newspapers and others), a banana (covered to deter fruit flies) and some dill and weeds. We mixed in the container of worms and, well, worm poop, and are letting them do their thing! 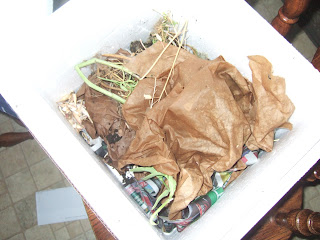 My little guy's job is to feed the worms - I learned that  a pound of worms might eat 1/2 pound of food each week, and they love banana peels and eggs. My oldest's job is to make sure the environment stays damp but not drippy.

It will be an interesting experiment to say the least!

I will look forward to updates! I have been wanting to try it too, but can't think of a great location (we have no basement) and am just a little squeamish about other critters that might be attracted by it. But, I do have that same styrofoam shipping container ... can't wait to hear how yours works out.

I had a worm farm when I was a kid. They don't do well in sand...Good luck with your composting!