Four states and nine hours separate my children from their cousin, so they're only blessed to see her once or twice a year. 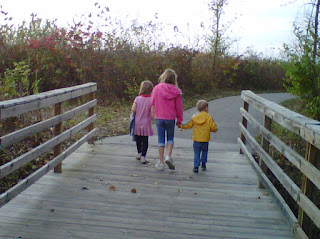 This time, they made the trek eastbound, and despite the fact my house still wasn't in tip-top shape for guests (but then, is it ever with two kids?) I consider the fact it's 7 a.m. and all other parties are asleep a minor miracle.
Take Wednesday, when my toddler woke up at 3 (a most unholy hour of night) to ask if his aunt and cousin were here. The next day it was 5. And naptimes? Forget about it. It's been a losing battle, though one I've largely stuck to at least trying to make happen.
But late, late Thursday night (OK, technically Friday morning), it happened. They arrived. And it's been a whirlwind ever since.
We started slowly, with the painstaiking process of making the world's best cinnamon rolls, forgetting that it's a four-hour process! But every kid got their hands dirty, from rolling the rolls (the girls) to punching the dough (perfect for 2 year old energy!). We went to the Children's Museum of Indianapolis, a rare treat that we could afford thanks to an awesome Groupon, to check out all things girl (a Barbie exhibit) and boy (dinosaurs and trains) and to experience the kids' first Haunted House (during not-so-frightful hours).
We went to the Broad Ripple Farmer's Market and scarfed down amazing pretzels that come in braids of three pretzels each - that my toddler knows are at this market and starts asking for the minute we arrive. We joke about the Bloody Mary mix in the bag, which we nix, and savor the chocolate milk from the local dairy.
We burn off our energy at the local park, where the girls opt for swings and mom somehow gets sucked into playing truck - which translates to: Sit on the step, immediately get up, get off the truck, get some mulch, put it somewhere and gt back on the step. Repeat for 30 minutes. I figure it's good for the thighs.
We've gotten our share of movies and Great Pumpkins and have toyed with carving our own pumpkin. We've had our share of minor squabbles and glimpses into funny conversations between the kids. I only wish 10 months didn't separate those.
Today will be another day of memories, and tomorrow they make the trek home. But really, the time is too short, and the breaks too long. Sometimes, I wish you really could click your heels three times to get to Kansas...
Posted by Robbie at 7:06 AM