Not dead yet: Our adventures with Hermie

Sunday, we officially became a family of five. Congratulations are in order.
You see, my oldest became the owner of her first "pet." While gardening, we stumbled on a green, striped caterpillar, and we brought it indoors. My daughter filled the container with leaves for the caterpillar to feast. She christened it "Lilly." 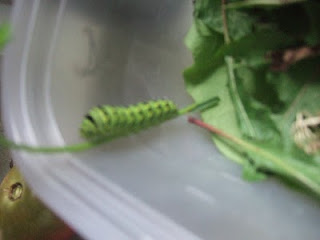 By morning, "Lilly" had become "Hermie," named after the Hermie the Wormie books. And whereas the evening before she couldn't keep her hands off Hermie, she suddenly was concerned Hermie was going to bite her. Hardly. Though the thing was eating (and digesting) its heart out.
Hermie made the travels to daycare, where it entertained a dozen children. Somehow it survived that and the drive home, despite me accidentally turning the thing on its side in transit.
This morning, Hermie wasn't going anywhere, and the kids were worried.
"He's dead!!" they screamed.
I assured him Hermie was only sleeping, cleaning out the container, gently moving the caterpillar out of the way. But I wasn't sure.
This afternoon, we had our answer. 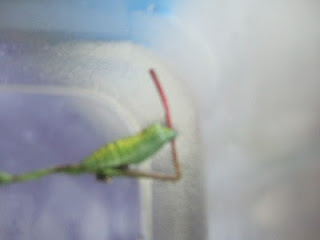 Turns out, Hermie's going through the change, and a chrysalis is forming. It will be a fascinating experience for the kids to watch Hermie evolve!
Posted by Robbie at 8:00 PM

I was little I got to 'raise' a butterfuly. It was a wonderful experiance, and I hope to get the chance to do it someday with my children!