Seed starting is great if you need the thrill of quick successes in the garden. It's especially helpful when you have two little helpers you're wanting to get interested in the process.

This weekend, we took our first stab at starting seeds for summer 2010. Last year wasn't as successful - we managed to start leeks, only to lose them in the transplanting process. This year, we're hoping for better results.

We went the route of least mess and invested with a pack of peat pellets, mostly because we'd saved the tray from the year before.


The kids had the fun of putting the pellets in the slots. 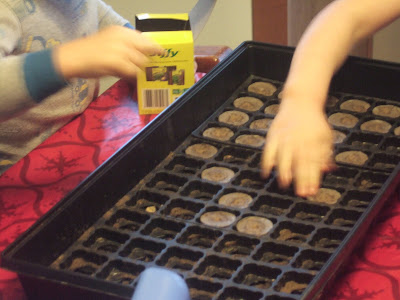 The were amazed to watch them grow as the pellets soaked up the water, and eagerly watched as I poked the first few holes in the top to add the seeds.

And then the toddler came back to the table with forks. Yes, forks. You have to rip apart the peat pellets somehow!

After getting the gang back under control, we planted a variety of seeds to try our fate. This year's batch included heirloom tomatoes, early broccoli, bok choi, rainbow chard, onion seeds, cucumber, squash and one watermelon under diress. I figured it would be a great way to show how all seeds and plants are different sizes and grow at different speeds.

Morning came, and we carefully lifted the top of the container. No change. But within three days, the broccoli were beginning to sprout. Next was bok choi. 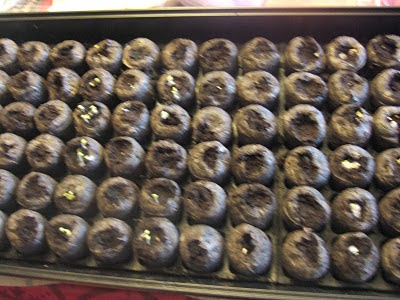 And then came rainbow chard. The first flash of red brought squeals of excitement from my 4 year old. So far, nearly everything has sprouted, except for the squash, tomatoes and melons. The broccoli sprouts are nearly an inch tall already. It's amazing how fast some things will grow.

So if you're looking for a few fast wins when gardening with your little ones, try seed starting indoors with a few of the options above.

If you have other vegetables that are easy to start from seed, please share your successes!

Neat, you're inspiring! I tried to skip a step and just plant in larger pots, but that didn't go so well, the bolted. So good job! I hope you can enjoy the "fruits" of your labor soon!