A Star Wars themed party means bright plans for a soon to be six year old. The biggest wish on the list these days is a pinata.

Trouble was I couldn't find one, and even the generic pinatas were at least $20 to $25 in prices. I shuddered to think what I would be asked to pay (and would refuse to do so) for a Star Wars themed one.

I stopped at a party store that was going out of business and found two lowly pinatas left in the store.
Trouble was they were Transformer-themed. A problem...until you looked at it upside down. Then I saw a striking resemblance to Darth Vader himself.

Six dollars later I presented the birthday boy with a task: We were going to make a Darth Vader pinata for the party.

We used a lot of leftover acrylic paint (both navy and black, I confess) to layer over the old design. 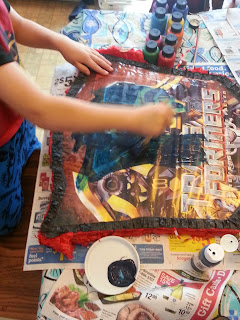 Both sides were painted solid black. 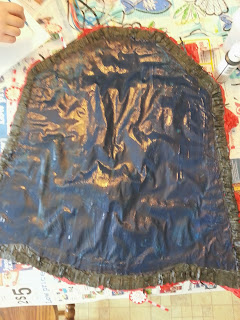 Then we added silver paint to copy off an image of Darth Vader off the Internet. It got the 5 year old stamp of approval. 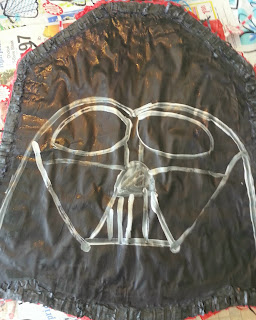 When it dries, we'll add a new cord or wire for the new top and fill it up.

The next challenge? Convincing my son we shouldn't hang a pinata from a Christmas tree!

This posted linked to the More the Merrier Mondays and Nifty Thrifty Tuesday.
Posted by Robbie at 1:43 PM