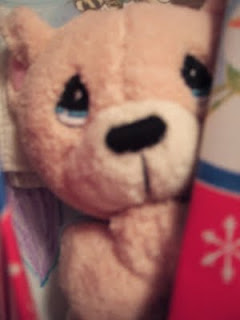 Really. As a parent, that's one of my greatest pleas this holiday season.

Just about any mother of a little girl can tell you that they're swimming in stuffed animals. Small ones. Fluffy ones. Musical ones. Ones so large that can wear their child's clothes.

If these were real animals, the codes people would be in force.

The problem with these fluffy friends is they're cute. Look at their sweet faces. The soft furr. The just-right-for-snuggling size.

And then they join the herd, forced to a lifetime of being squished in their corral of the parents' choice, largely forgotten until the day mom or dad decide they have had enough and attempt to clean out.

And what can you do with stuffed animals who have lost their love? Parents don't want them. You can hardly donate them. Instead, many of them meet the same fate as one Build-a-Bear, casually tossed on the curb down my street.

This holiday season, save the animals. If you think your family's or friends' children need someone to cuddle, there are little arms waiting for real hugs.
Posted by Robbie at 7:56 PM