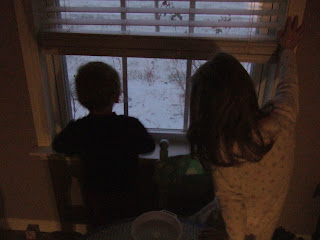 When you're little, the first snow of the season in particular is just magic. The dusting of snow sprinkled over the leaves, the grass. The allure of stomping in fluffy, cold flakes. The dream of snowballs and snow angels.

I confess that our morning delays weren't 100 percent due to the roads (though Hoosiers' general ability to forget how to do winter driving the first snow of the year always amazes me). No, it was watching my two little ones' amazement at the world around them.

They stared out the window. "It's Christmas Eve!" my oldest declared. Boy, we have a lot of Christmases to contend with then, I thought.

The little one said nothing. Instead, he seriously pushed and pulled their chairs so the two of them could sit in front of the window and watch the world. I don't know when it is that our thrill of that first snow wanes, but sharing their moment this morning brought it all back.