Sew what? Stuffy and the Sandwich Bags

Last weekend I was excited to have scored both a "grown-up" and a kids book on sewing at our local library's Friends sale. To which my very own mother retorted, "Will your daughter learn to sew first or will you?"

First off, I can sew. And my sewing machine? It's been lovingly packed in its box since I got it...11 Christmases ago. (Of course, I was in graduate school and working full-time, then in the middle of a move, then became a parent...blah blah blah.)

Last year, I decided my first dive into actually using it as a sewing machine instead of a potential first step for my son in his closet would be making reusable sandwich bags for school lunches. I had the chance to review a few last fall, and realized that they are fairly simple contraptions...if you have the time to make them!

So with the best of intentions, I picked up nylon scraps and velcro at a fabric store...last fall. Summer passed, and I realized that I really could use a few more sandwich or snack bags, but was hesitant to pay for more cloth wraps (or for their plastic counterparts).

So this weekend, armed with $4 worth of materials, the fabric from my beloved pink wrinkle-free Coldwater Creek shirt that ripped after four years, and a hovering six year old, I went to work. Without a pattern. Or reading the instructions for the sewing machine!

My daughter, to her credit, made felt finger puppets patterned (loosely) after those in her kids sewing projects book. And that's when I learned a few things:

1. My daughter doesn't like directions any more than I do.
2. Imperfect is OK too.

For a few hours' of work, four dollars and minimal swearing, we wound up with two sandwich bags, two snack-size bags (great for crackers or the dried mango she loves), and Stuffy and Floofy (her names) finger puppets. 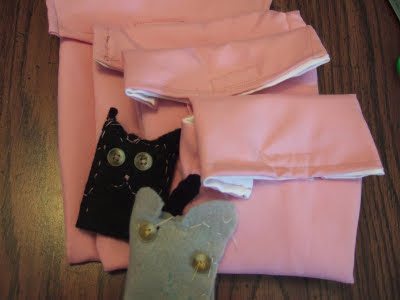 For two girls who don't listen, I don't think we did bad work! And, thankfully, I have up to another year to convert my other ripped wrinkle-free shirt into blue baggies for full-day pre-K. (Oh, and mom, I guess you could say it's a tie. And I could use a few more Coldwater Creek wrinkle-free shirts for my birthday.)

Congratulations. They look good. Where I have sewing students with the most problems, is that they don't thread the machine or bobbin correctly. A lot will miss the little wire immediately above the needle. Then the machine will not sew nice even stitches. Yours look pretty good and congratulations to Nicole on her puppets.
Mom

Good for you! I tried my first project since I was 10 earlier this summer.

It was nice and cool since we're keeping the house at 80 or higher, but it wasn't worthy of being worn outside the house :)

I want to try one of the tank tops made from pillow cases next. Less hemming :)

I'm learning to sew, and more than happy to buy my reusable food bags from competent seamstresses for now. Maybe someday...

Betsy, I hear you! This was my first sewing project since, well, I was a kid, other than fixing a button or hem or sewing on scout patches. If you looked at the stitching, you would be less impressed! :-)

Hi visiting via farmers daughter. I felt an immediate kinship when reading about the 11 years your sewing machine spent in the dark! I have over the past year pulled mine out into open existence as well. I agree imperfect is FINE! here is something to stuff those lovely snack bags with http://recyclingmama.squarespace.com/home/2012/9/14/two-sweet-cookies.html
Have a lovely weekend!
Of to surf your blog,
K