You're never too young to be a help in the kitchen. As a parent, I don't understand those who keep their kids out of the kitchen at all costs. Sure, there are times when you have boiling water or sauteeing in oil, when you don't want a helper close by. 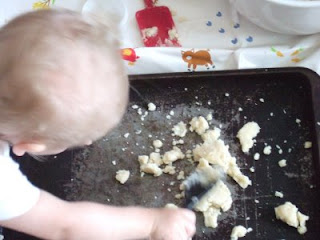 But think of all the missed opportunities out there!

My toddler, sitting in his high chair, has watched Mommy cook and "helps" by getting his own lettuce, flour, or whatever to play with in a bowl or cup measurer. It's great entertainment, and, frankly, I can control the mess, or at least, the geography in which it occurs.

Sunday, though, was his first formal cooking lesson: Baking cookies.

My daughter wanted to be my sous-chef that day as her special activity (yes, being a "sous-chef" is very important in our house). I asked her what she wanted to make. She said cookies.

I should have known.

So I spread out the high chair drop cloth, got out a sturdy bowl and two spoons, and we got to work with the same recipe she's used since she was about 18 months old. Over time, it's been pared down to a recipe making about a dozen cookies.

Because, you see, for kids, it's about the process, not how many dozens you make.

So my 16 month old happily helped alongside of his sister. He banged his cup measurers on the flour container and the bowl. He stirred the dough. He put cookie dough in his cup measurer, on the cookie sheet haphazardly, on his legs, the soles of his feet, his hair. He was the happiest kid on the block Sunday morning.

My daughter, patiently, worked around her brother, stirring the dough with precision, popping samples in her mouth, making the occasional ball of dough on the cookie sheet.

And in the end, those were the best nine cookies we could have had for dessert.
Posted by Robbie at 8:39 AM

that's great--i'll have to try that recipe--the ones i've done have too many ingredients and i start to lose patience :)