She ought to be in pictures 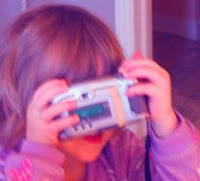 My trusty digital camera has survived two operating rooms, trips on either coast, hiking through several national parks and countless adventures with children. Given that I once had a habit of destroying my not-so-childproof cameras on an average of once a year, it's little wonder that I'm thrilled to have made it 3 1/2 years on this one.

And then one day, our resident wanna-be photographer got some pint-size competition.

It all started when a playmate received a Disney princess digital camera for her birthday. I think another one of her friends did too. And a good friend of mine confided that her daughter, not much older than mine, got her first camera as the "big sister present."

Does someone really need a digital camera before they can legibly write their name? It's hard for me to fathom, even though I recognize we're tumbling through an increasingly digital era.

I wondered what to do. And then my answer came.

Buried inside an old curio cabinet lay, untouched and forgotten, a decade-old APS camera. One that once proudly shot panoramic shots and more. In a digital world, it was passed over. After all, there's something to be said about realizing your shot was lousy before you pay for it being developed.

Dusty and tired, it sat in the cabinet, as its owner couldn't part with it but didn't know what to do. And then someone (admittedly who wasn't supposed to be in there) came proudly marching in the room. The flap for the flash stood at attention. The lens touched her eyelids. The film slot flapped open.

And a ever-so-proud little girl yelled, "Say cheese!" And she took my photo, flipped the camera around to show me how it turned out, then turned to take her brother's photo. And ever so predictably, he mugged for the camera.

Maybe we can hold off a little longer on kiddie digital cameras and worries about an SD card popping out on the floor and into her brother's mouth. Because a dusty, battery-less camera and a little imagination is all it takes.
Posted by Robbie at 9:05 PM

Email ThisBlogThis!Share to TwitterShare to FacebookShare to Pinterest
Labels: children

Ahh! So much more meaningful too!

OH, how cute. I thought about getting her a camera for Christmas, but thought she should be just a little bit older. Please send me the picture so I can scrap it at the crop on Friday.
Mom

oooohhhh, how adorably cute. My kids have been sneaking the camera since about age two. I think every age group is very cute..